Joseph O’Brien has come a long, long way since winning an Under 17 Junior Premiership just a few short years ago. O’Brien is umpiring full-time in Sydney and made his NEAFL debut this season at Blacktown International Sportspark In Round 3, when the Sydney Swans played Redland from Queensland in a 7-point thriller. Match scorecard here:

We caught with O’Brien recently and asked how he felt being based in Sydney and on making his NEAFL debut; “It’s been really pleasing being based in Sydney fulltime and being exposed to Sydney footy last year and this year and being able to train with the NEAFL panel. I was really surprised and happy to get a reward early this season; it was great to make my debut early in the season, with some great support from coaching staff”.

O’Brien has a lot of driving each week as he pursues his umpiring dream, living in Singleton, attending the University of Newcastle Callaghan Campus in his final year of a Bachelor of Physiotherapy Degree (with classmates including Newcastle City utility Cade Triffitt and Singleton Captain-Coach Andrew Scott), plus training and umpiring in Sydney.

“State Umpiring Manager Pierce Field and, before him, Damian Anderson have been really good in understanding and support, given I have a 200 kilometre one-way trip to Sydney to train and on game day. They are happy for me train on my own on times.

In 2018, I was at Uni five days a week, and combined with umpiring and training, I was doing something like 1300-1400km on the road every week during the season. I love umpiring and the road travel is just what I do. I am really enjoying umpiring in Sydney, after umpiring for five years in the Black Diamond Cup. I have enjoyed meeting new colleagues in Sydney, and it was a real thrill to umpire the AFL Sydney Grand Final last year”.

O’Brien advised he has a training program for each week of the season; “Mondays are a general running session, outside regular training on Tuesdays & Thursdays. I like to average at least a 5 or 6k run on my own. I’ve never been a big fan of the marathons and half-marathons that some people do, so for me I like to go for a general run once a week, more for cardio-respiratory fitness, but if I wanted to do a hard run, I like to do a short but intense run, keeping a relatively good pace over 1000m and not backing off.

Wednesdays and Fridays are normally designated as “off-legs”days, and we usually incorporate swimming or cycling on those days also adding a stretching program or some work on the rollers to help out”.

O’Brien also stated that “our Tuesdays are dedicated to specific conditioning, combining long-distance running with short, sharp sprinting, incorporated with some agility work. It’s great if an Umpire can run 10kms straight and not feel the effects of that too much, but in a game of footy, the game is only getting quicker, especially the higher up you go.

It has been a big step-up from umpiring Black Diamond Cup games to Premier Division Sydney games, as regards the speed and skill level, then again stepping up to the NEAFL, it was a really big step in the intensity and also the duration of the game, with NEAFL games being fully timed as opposed to Sydney or Black Diamond Cup fixtures. I am one of five rookie-listed umpires on the NEAFL Panel, with the Panel having full-time members based in Sydney, Canberra, Brisbane and Darwin”.

We were lucky enough to catch up with AFL NSW/ACT State Umpiring Manager Pierce Field, asking him some questions about Joseph O’Brien. Pierce gave us an insight into O’Brien’s identification and development:

Joseph’s initial identification as NEAFL level talent occurred in 2017 when he was selected in the NEAFL Development Squad and umpired in the inaugural GWS Giants AFLW game v Fremantle. “Joey performed very well in his first two NEAFL games” and we have no doubt there will be plenty more on the horizon. Although not fully listed as a NEAFL umpire yet Joseph is on the Rookie list which is a tremendous achievement. As a NEAFL Rookie he is required to “train twice a week plus complete a rigorous running schedule” to ensure his fitness is at a high level. State Umpiring Manager Pierce Field finished by mentioning “Joey has the potential to be a solid state league umpire in the short term. He has a lot of talent.”

We wish Joseph O’Brien all the best in his future umpiring endeavours and thank him for his time in speaking with us. 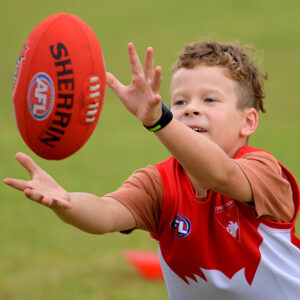